The Russian ruble will outperform the US dollar in the short term. The catalyst was the huge deficit in America’s oil stockpile last week. According to the American Petroleum Institute published on September 14, inventories fell by -5.437 million barrels. The figure is higher compared to analysts’ consensus estimates of -3.903 million and the prior week’s -2.882 million barrels. The crude deficit is on its tenth consecutive week. Meanwhile, the Energy Information Administration released the government’s official data at -6.422 million barrels. The result is two times higher than forecasts and four times bigger than last week’s result. As a result, crude oil advanced. The 2 dollars addition benefited Russia, which is a major oil exporter. USDRUB will fall from the descending triangle support. The 50 and 200-moving averages supported a further decline, with the former showing a skewed move to the downside. Meanwhile, the MACD indicator continues to trade below zero. 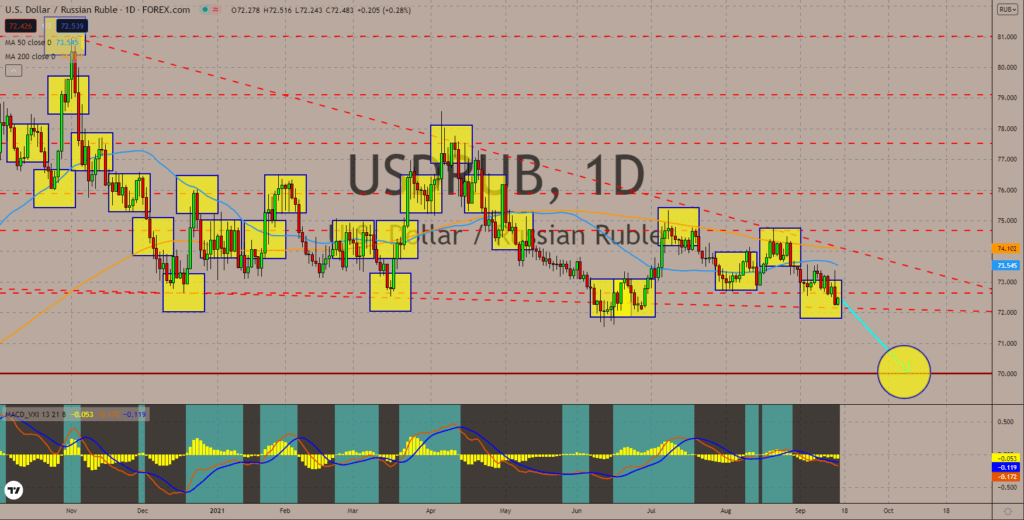 Analysts anticipate the Hungarian central bank to raise rates for the fourth consecutive time on September 21. The 25-basis points forecast would send the benchmark to 1.75%. In the previous rate hikes, Nemzeti Bank added 30-basis points each. On June 22, Hungary kickstarted Europe’s interest rate increase. In other news, the government issued 10-year and 30-year maturity bonds. The 4.25 billion dollar-denominated bond offering is four times oversubscribed, highlighting the favorable conditions of the economy. Citigroup, Goldman Sachs, and JPMorgan Chase were the underwriters. The money that will be raised from the offering is part of the 2022 budget deficit by the Hungarian government. The funds would support the economic growth trajectory of Hungary. In addition, the interest rate hikes keep the forint stable. The 50-day and 200-day moving averages formed a bullish crossover in August. However, analysts expect USD to underperform in sessions. 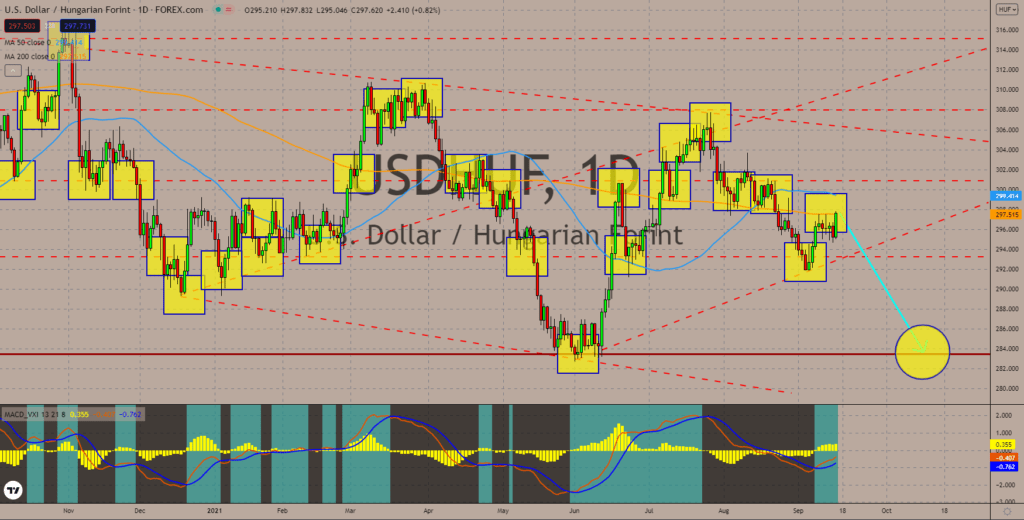 Policymakers in the Czech Republic discuss the possibility of monetary tightening at a faster pace. Prague was the second in Europe to increase the interest rate after Budapest. To date, the country has added 50-basis points on its benchmark since June 23’s hike. On September 30, Czech National Bank will announce if it holds the 1.50% interest or increases by another 25-basis points. The market is expecting a hike to 1.75%. The bullish forecast sent the Czech koruna index to levels last seen in February 2020 or before the pandemic. Another recent report is the Producers Price Index (PPI). The economic indicator logged a 1.2% increase month-on-month against th3 0.4% projections. Meanwhile, the annualized data came in at 9.3% from 7.8% in July. The result soared to its highest level in nearly three decades. The 50 and 200-MAs around 21.60597 and 21.50789 are the current resistance. For the MACD, analysts expect the lines to hover near the base of zero. 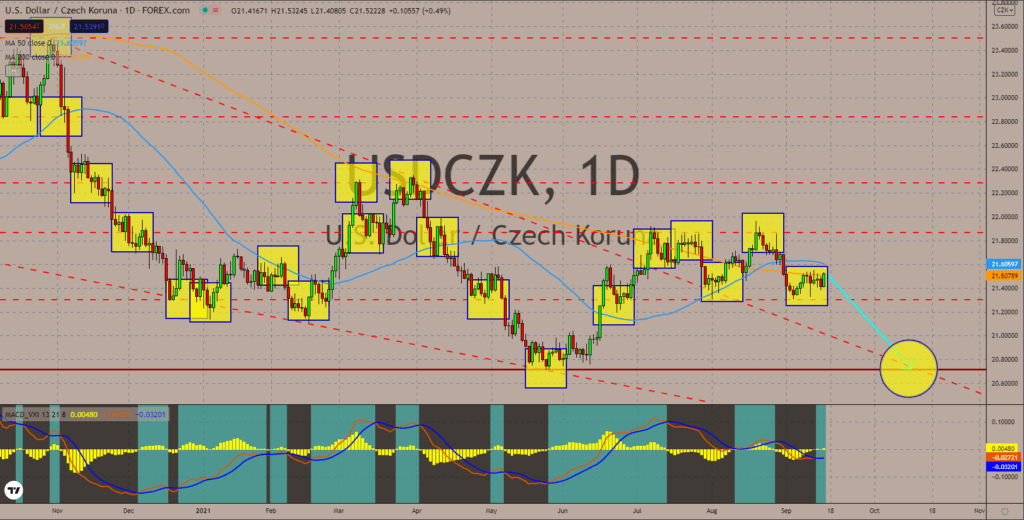 ECB President Christine Lagarde said the Eurozone economy is recovering faster than anticipated. The speech on Thursday reflects the growing optimism for monetary tightening in the currency bloc. Last week, the European Central Bank stunned market participants after a 20 billion euros cut in its monthly bond purchases. The ECB’s 1.85 trillion euros Pandemic Emergency Purchases Program will now have a 60 billion monthly allocation, down from 80 billion euros previously. The ECB chief said the move is not a sign of tapering. However, the market says otherwise. The recent consumer price index (CPI) results also point to tightening to tame inflation. On technical, the EURCHF pair nears to break out from the downtrend channel. The key areas to challenge are at around 1.09019, which coincides with the 200-day moving average. Meanwhile, the MACD and Signal lines show a possible extension of the bullish move. The Histogram is flat for two sessions. 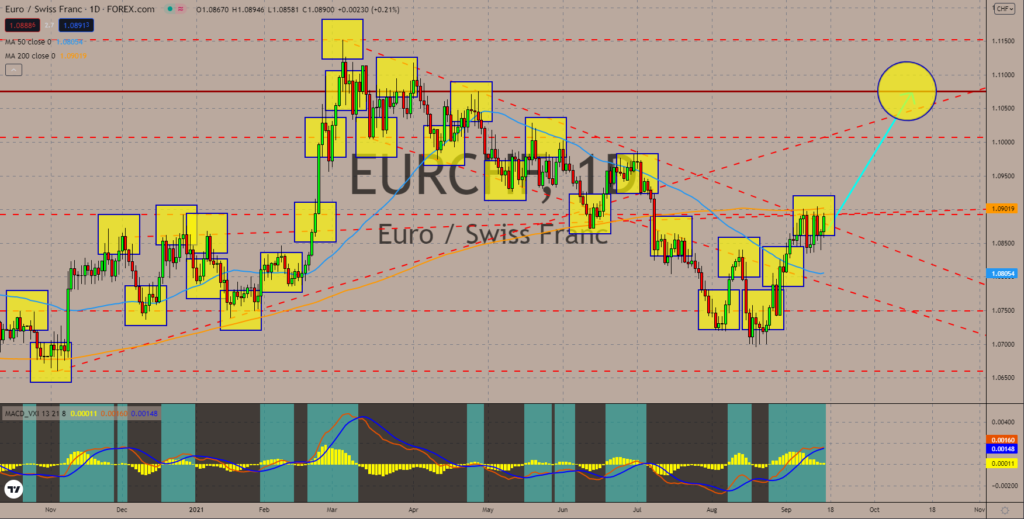