The dollar held firm near a two-week high against a basket of six other currencies on Monday, with investor risk appetite help up in spite of the most recent data showing China’s 2018 economic growth slowing to a near three-decade low.

The dollar index, which tracks the dollar’s strength against a group of six other major currencies, was firm at 96.308 after increasing 96.394 on Friday, its strongest since January 4.

Hopes for a relaxing in US-China trade tensions, a more dovish-sounding  Federal Reserve and optimism that Britain could avoid a “No-deal” Brexit are some of the factors that have fanned the return in investor risk appetite, which went to a deep rock bottom in December as global equity markets tumbled.

Along with the decline in Treasury yields earlier in the month which had accompanied the retreat in equities, the dollar index had slumped to a three-month low near 95.00 on January 10.

“The dollar index is clearly on a recovery track. The currency was stuck in a downtrend at the start of January but is now being bought back against its peers such as the yen, euro, pound, and the Aussie,” said Junichi Ishikawa, who is senior forex strategist at IG Securities in Tokyo. “Whether the current ‘risk on’ supporting the dollar can continue will likely depend on how US corporate earnings turn out. The United States and China falling out again over trade issues and volatile US politics still remain the main potential risk factors.”

The US-China trade friction has already put pressure on China’s economy, with the most recent data showing the world’s second largest economy slowing further in 2018’s last quarter.  Market seemed to take the outcome, largely in line with expectations, in their stride.

The dollar was down 0.1 percent at 109.64 yen, taking a pause after climbing to a 3-week high of 109.895 on Friday. The dollar had increased more than 1 percent against the Japanese currency last week.

Sterling had increased to a two-month peak of $1.3001 on Thursday on growing confidence that Britain can avoid leaving the European Union without a deal, but faced some selloff on Friday.

“The pound is at current levels based on assumptions that a no deal Brexit has been avoided. But even an exit with a deal will likely leave some damage on the economy, so it is difficult to see the pound make much further headway from here,” said Koji Fukaya, who is president at FPG Securities in Tokyo.

British Prime Minister Theresa May will put forward a motion on her proposed next steps on Monday. Over the following week, lawmakers will be able to propose alternatives. They will debate these plans on January 29, and the voting on them should be able to indicate whether any could achieve majority support. 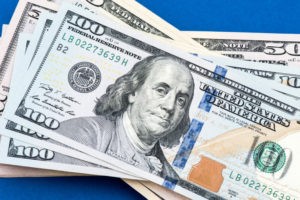 The Australian dollar was steady at $0.7166 after finishing Friday 0.3 percent lower.

The Aussie was mainly unmoved by China’s growth numbers though analysts agree that any steep drop in demand from its biggest trading partner would put a blow to local assets.

Australia’s close trading links with the world’s second biggest economy means that its currency is usually regarded as a proxy to China-linked trades.

The 10-Year Treasury note yield increased to a three-week high of 2.799 percent on Friday, continuing its rise from a one-year low of 2.543 percent hit in early January.

The US financial markets will be closed on Monday for Martin Luther King Jr. Day.