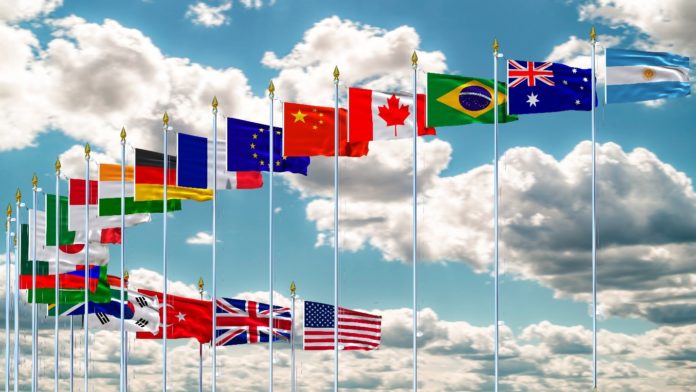 The Group of 20 economies witnessed gross domestic product return to pre-COVID levels in the first quarter of the year. However, with large differences emerging between nations.

According to the latest data from the Organization for Economic Cooperation and Development published Thursday, GDP of the G-20 area increased by 0.8% in the first quarter, compared with the fourth quarter of the previous year.

Year-on-year GDP growth for the G-20 recovered to 3.4% in the first quarter of the year, following a reduction of 0.7% in the previous quarter.

The world’s second-largest cryptocurrency, where the COVID-19 pandemic emerged, posted the highest annual growth of 18.3%. Meanwhile, the United Kingdom witnessed the biggest annual fall of 6.1%.

Data revealed that Europe fared particularly badly in the first quarter when the third wave of coronavirus infections hit the region.

India, Turkey, and China continued to see a rebound in the first quarter of 2021. India increased by 2.1%, Turkey surged 1.7%, and China boosted by 0.6%. Remarkably, China’s GDP was already above pre-pandemic levels in the previous quarter.

However, for the remaining G-20 economies, GDP is still below pre-pandemic levels, with countries posting unexpected divergences in the first quarter.

Notably, GDP growth accelerated in the United States to 1.6%. The country posted a gain of 1.1% in Q4 on 2020. Meanwhile, growth slowed in Indonesia, Canada, South Africa, and Mexico.

Growth was negative in Germany, as the country’s GDP fell by 1.8%. Meanwhile, Germany witnessed 0.5% growth in the fourth quarter. Britain declined by 1.5%, after 1.3% growth. Growth was also negative in Japan and Saudi Arabia. In France, GDP continued to decrease for the second consecutive quarter, although at a slower pace.

The United Kingdom and Italy witnessed the largest gaps to pre-pandemic GDP levels. Britain fell by 8.7%, and Italy lost 6.4%. However, Germany, France, the euro zone, and the European Union still registered gaps of over 4%.