Due to concerns over the apparent economic slowdown, and in spite of the supply cuts by oil cartel OPEC and US sanctions toward Venezuela, oil markets plummeted on Friday.

US West Texas Intermediate (WTI) crude futures stood at $52.20 per barrel. This was 44 cents lower than the previous close, or 0.8 percent. Last session, WTI had shed 2.5 percent.

After slipping 1.7 percent during the previous session, Brent Crude oil futures stood at $61.19 per barrel, 0.7 percent lower and down by 44 cents.

Growing concerns of irreconcilable trade tensions between the US and China dented global economic prospects and dragged down financial markets, including crude oil futures.

On Thursday, US President Donald Trump said that the didn’t plan to meet with Chinese President Xi Jinping before a March 1 deadline set by the two sides to seal a trade agreement.

Trump has warned that he would slap higher US tariffs on Chinese imports if the two economic powerhouses did not reach an agreement on or before the agreed deadline. Another round of discussions is scheduled for next week in Beijing.

“Crude prices returned to the lows of the week as slower growth prospects… could signal a return (of reasons) for inventories to rise,” said a market analyst from a futures brokerage.

Meanwhile, the European Commission decided on Thursday to cut forecasts for euro zone economic growth as it expects global trade tension and an array of domestic challenges.

The Commission estimated that growth this year would be slow at 1.3 percent from 1.9 percent during 2019, before rebounding in 2020 to 1.6 percent.

In spite of this, traders believed that crude prices were prevented from falling much further by supply cuts that were led by the Organization of Petroleum Exporting Countries (OPEC), implemented late last year to tighten the market and push up prices.

Saudi Arabia, which the world’s biggest crude exporter, slashed its production in January to 10.24 million barrels per day, or less 400,000 barrels per day. 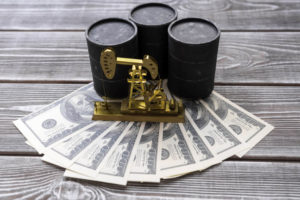 Then there’s also the risk that comes from Venezuela, to which US has slapped sanctions in late January. Analysts believe that the decision would wipe out 300,000 to 500,000 barrels per day of exports.

However, the international oil market was only partly affected by the sanctions at present.

“The (Venezuela) disruption overall seems manageable both for the US and the global market,” said the head of commodity research at a Swiss bank. “The oil market sits on a comfortable cushion of supply.”