China Made a Rare Decision by Abandoning a GDP Target

Home » China Made a Rare Decision by Abandoning a GDP Target

The world’s second-largest economy made an unusual decision as China decided not to set a target for its economic growth in 2020. The country made a rare decision due to uncertainties caused by the coronavirus pandemic.

According to Chinese Premier Li Keqiang, his country will face certain factors that difficult to predict in its development due to the uncertainty regarding the pandemic. Thus, it makes sense not to set the target for economic growth in 2020.

Importantly, Chinese Premier delivered his work during the opening session of the National People’s Congress. Notably, China’s annual parliamentary meeting was delayed by about two months this year. The authorities made this decision as that it was too risky to organize such meetings.

As a reminder, in 2019 the gross domestic product (GDP) expanded by 6.1%. However, the local economy contracted by 6.8% in the first quarter of 2020. Hopefully, data showed some recovery in April. However, as the pandemic reached almost all countries in the world, this factor would affect China’s economy. Moreover, as the number of confirmed cases continues to rise, this is a serious obstacle for China, as it will be harder to boost the economy.

China’s economy and the main challenges 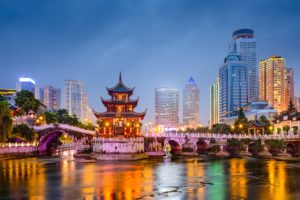 Importantly, even though China did not sept a GDP target for 2020, authorities still laid out some specific numbers for employment and inflation. According to the Chinese Premier, the priority of the government is to ensure a low unemployment rate.

Moreover, Beijing will target an unemployment rate of 6%. Last year’s goal was 5.5%. Also, the government promised that the number of new jobs would increase by 9 million. However, that number was fewer than the 11 million targeted last year.

Chinese Premier also discussed other issues. He laid out a plan for a moderate increase in government support for the economy. Also, the fiscal deficit will grow from last year by 1 trillion yuan ($142.86 billion). As a result, a deficit-to-GDP ratio will reach more than 3.6%.

Additionally, Li stated that one trillion yuan of government bonds for COVID-19 will also be issued. This is not the end of the story as special local government funds for project development will also increase by 1.6 trillion yuan compared with last year for a total issuance of 3.75 trillion yuan. Hopefully, the country’s government is ready to measures as otherwise, it will be tough to get the economy back on track. Moreover, the government should work with the private sector to identify the main challenges.