The Danish economy contracted by -1.0% in the first quarter of fiscal 2021. Aside from a less-than-feared result, the figure was also a major improvement from the two (2) preliminary numbers of -1.5% and -1.3%, respectively. Analysts are expecting that a revised number will be published during Q2’s preliminary report. Along with the improving GDP data from Denmark, the country’s unemployment rate for May also surprised investors. The 3.6% reading represents the lowest record throughout the pandemic. Despite the optimism, investors are concerned regarding last year’s hacking incident in SolarWinds. According to the latest report, Danmarks Nationalbank could have been compromised. The news is expected to send the krone lower against the greenback. The MACD and Signal lines are seen extending their bullish move as prices moved past the MAs at 6.15295 (50) and 6.19984 (200). The target is near the 6.55000 psychological area. 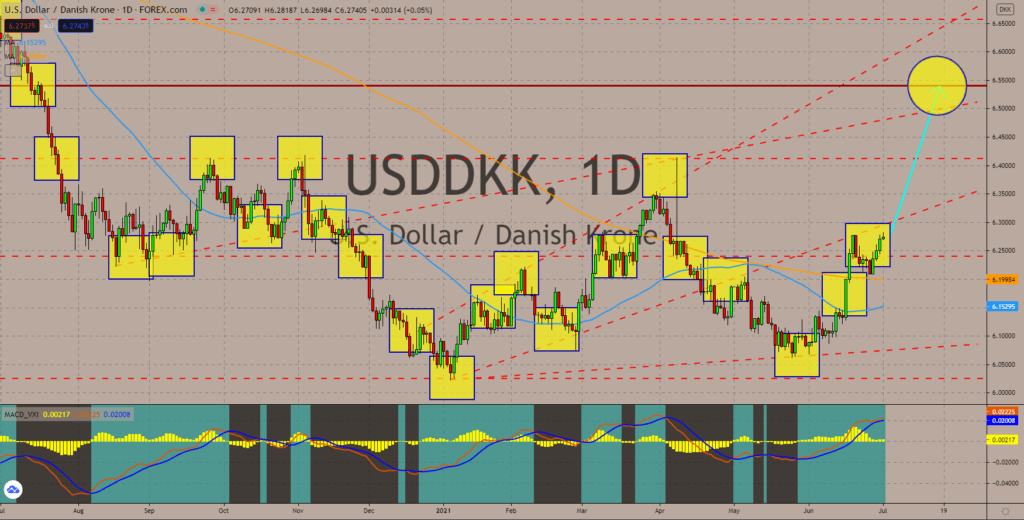 Demand for the British pound will soar after the disappointing GDP data for the first three (3) months of the year. The world’s fifth-largest economy was down by -1.6% based on Wednesday’s report, June 30. The number was lower than the -1.5% estimated decline. On a year-on-year (YoY) basis, the United Kingdom’s economy shrinks -6.1%. Analysts see two (2) factors that impact the UK’s gross domestic product (GDP) result. First, the third wave of the coronavirus peaked in January. This resulted in the country entering a bad footing at the start of the year despite massive economic activity in mid-March. And second, the United Kingdom left the European Union on the first day of 2021. In December 2020 and January 2021, Britain incurred trade deficits of -14.79 billion and -14.32 billion, respectively. The Histogram shows the bulls slowly taking over the GBPNZD pair. Meanwhile, prices rebounded from the 50-MA and uptrend channel on June 28. 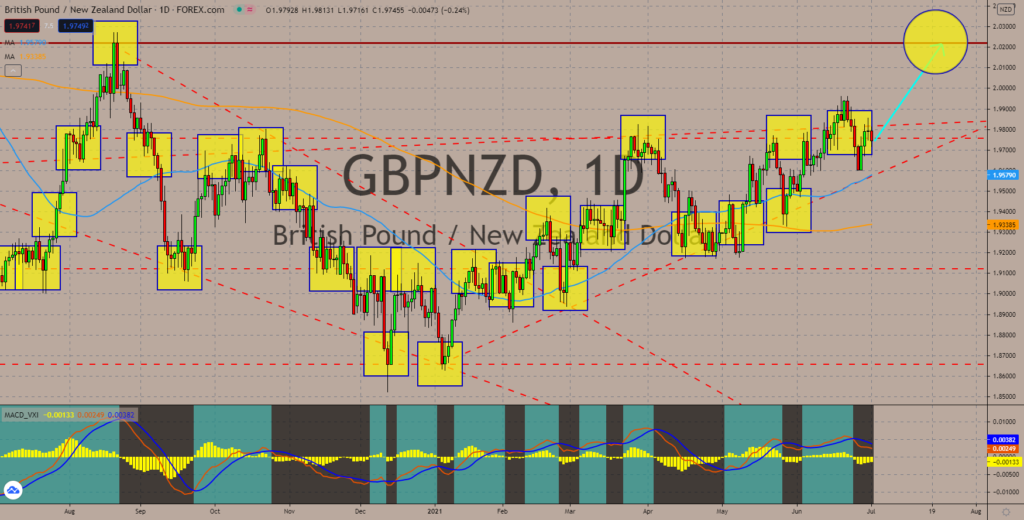 The Purchasing Managers Index (PMI) report from China showed a slow down in the world’s second-largest economy. HSBC’s in-house PMI report for the manufacturing sector declined to 51.3 points in June. Meanwhile, the official government tally fell to 50.9 points which is higher than the 50.8 points consensus estimate but below the previous result of 51.0 points. The Non-Manufacturing PMI saw the biggest percentage points change from 55.2 points in May down to 53.5 points. As for the Composite PMI, the 52.9 points result was caused by the disappointing number from the manufacturing sector. China’s clampdown on tech companies along with tighter price control limits Beijing’s economic growth according to analysts. President Xi Jinping was reportedly behind the fallout of Ant Group’s supposed record-breaking IPO. In April, its parent company Alibaba was fined 2.8 billion. Prices are expected to defy the MACD indicator and MAs. 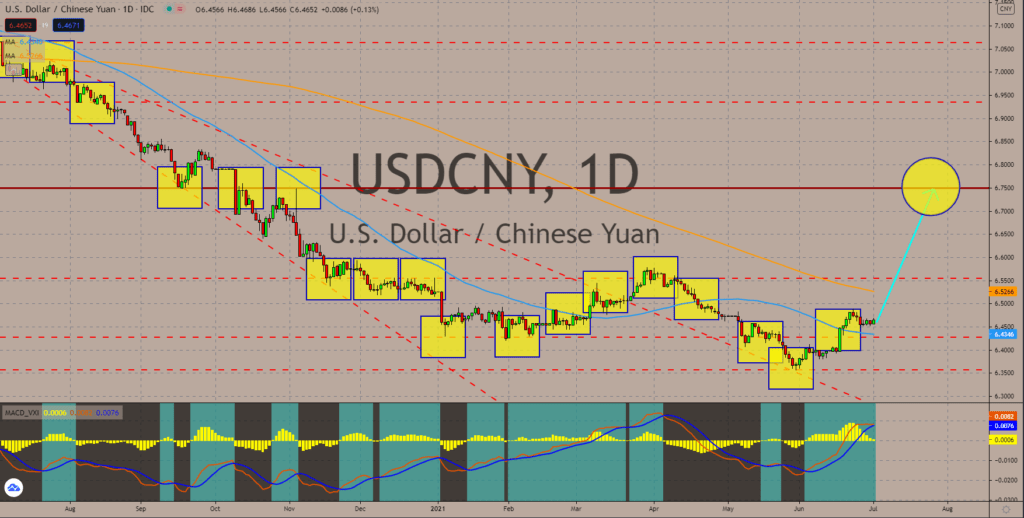 The Turkish PMI data for the manufacturing sector in June soared to the expansionary level at 51.30 points. The number ended two (2) consecutive declines in the report since April this year. The same is seen in the Economic Confidence Index  which recorded 97.80 points on Tuesday, June 29, for the same month. While Istanbul incurred a deficit of -4.13 billion in May, the overall trend shows declining deficit figures since August 2020. On the other hand, the strong US labor market will drive the US dollar higher against the Turkish liar. On Thursday, July 01, the jobless claims report posted its lowest weekly unemployment benefit claimants during the pandemic at 364,000. Meanwhile, the ADP Nonfarm Employment Change added 692,000 jobs in June. This gives hope that the NFP report on Friday, July 02, will come in higher than the 700,000 consensus estimate. The USDTRY pair is expected to find support from the 50-moving average at 9.50000. 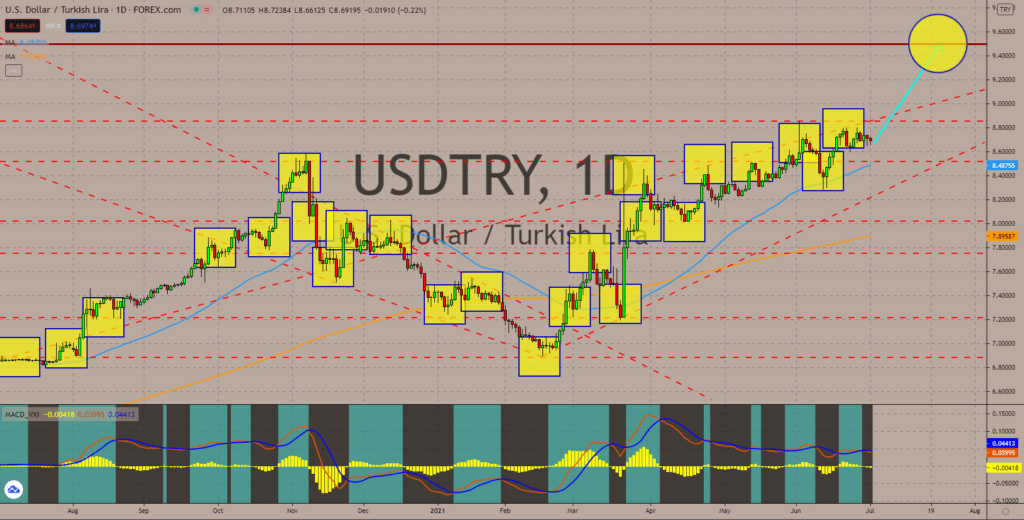