The Eurozone, Germany, and France’s initial Purchasing Managers Index reports failed to beat the consensus estimates. The manufacturing sector took the most beating. For the currency bloc, the result fell 2.7 points to 58.7 points. The market’s expectations are a fall to 60.3 points. Germany and France have almost the same reading, coming in at 55.3 points and 55.2 points. However, the EU’s largest economy suffered worse with a 4.7 points decline. As for the services sector, the figures were 56.3 points for the Eurozone and 56.0 points each for Germany and France. The latter came in line with estimates, while Germany fell nearly 5.0 points. The Composite PMI is a combination of the manufacturing and services results. For the EU, the figure is 56.1 points. The expectations are 58.5 points, while the previous result stood at 59.0 points. Germany and France had 55.3 points and 55.1 points. The MAs and the MACD confirmed the EUR/USD’s bearish bias. 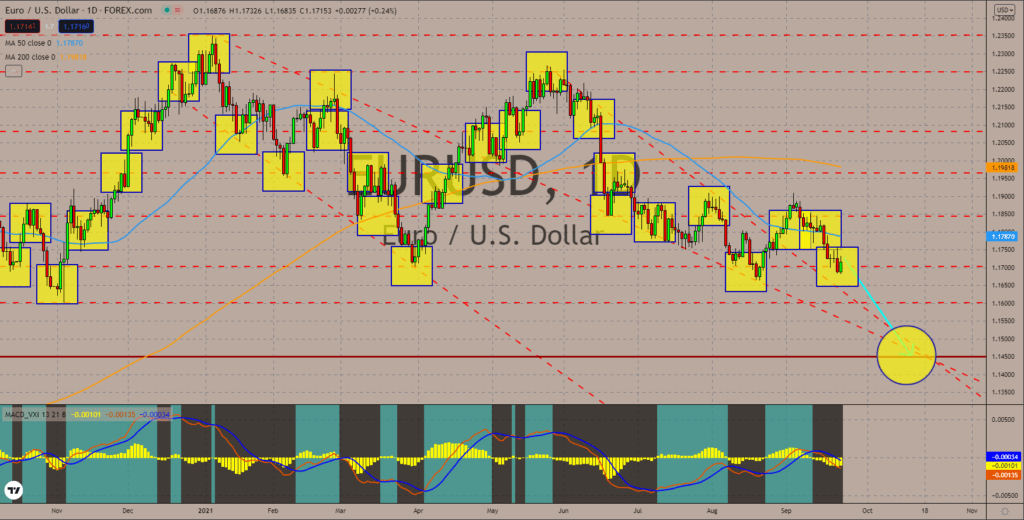 The Federal Reserve kept the 0.25% interest rate on hold until the next meeting. The result is in line with the market’s expectations. In addition, the US central bank reaffirmed its commitment to cut the 120 billion monthly monetary aid. The only difference during September 22’s meeting is an increasingly hawkish tone by Governor Jerome Powell. The Fed chief said that tapering might soon start and that interest rate will come by 2022. In the last meeting, Powell said that pulling the 120 billion economic aid does not suggest a hike. However, the comment in August contradicts the earlier hike projections from the 2023 forecast. The bullish outlook is amid the improving financial and economic data, particularly in the labor market. The jobless claims keep on hitting pandemic low. The result means that most businesses now have the financial capacity to expand operations. The pair is up from the 50-moving average, while MACD looms a “bullish crossover.” 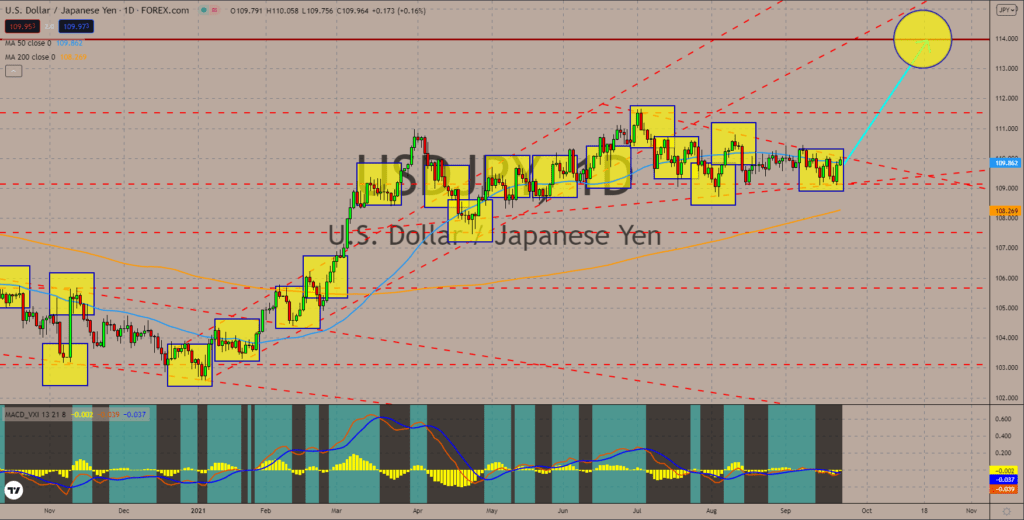 CAD’s election rally is over as economic data showed Canada’s current financial situation. July’s retail sales fell -0.6%. The figure is better than the projected -1.2% decline but represents a huge drop from the previous 4.2% increase. Meanwhile, the July Core Retail Sales came at -1.0%. The market’s forecast is for a decline of -1.5%, while June’s data stood at 4.7%. Analysts expect a further fall in the upcoming reports as the fourth wave of the pandemic started in early August. Another report for the week is New Housing Price Index, which advanced by 0.7% in August compared to the previous 0.4% jump. On the other hand, New Zealand Prime Minister Jacinda Ardern lifted Auckland’s alert level 4 and replaced it with alert level 3. Despite the bearish signal from the MACD line and Signal line, Histogram shows signs of a possible trend reversal. The 50 and 200 MAs show signs of a potential “bullish crossover” for the chart before the month ends. 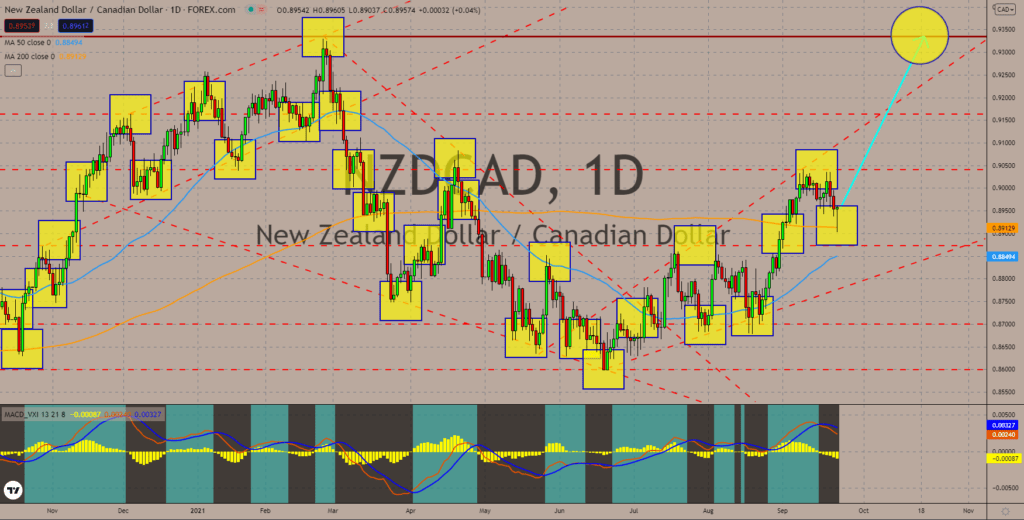 The Bank of England maintained its short-term monetary policies on September 23. The interest rate stood at 0.10%, while quantitative easing is still at 875 billion pounds. However, all BOE Monetary Policy Committee (MPC) members have now agreed to extend money printing until the end of 2021. As of August 05, only 8 out of 9 members want to maintain an accommodative policy. Analysts expect further easing after the central bank downgraded its growth projection for the UK economy. The third-quarter estimate now stood at 2.1%, a major decline from 2.9% previously. If the actual figure came near the prediction, the world’s fifth-largest economy would be lower by 2.5% against the pre-pandemic level. Also, the BOE warned of higher crude prices as countries are forced to reopen their economies amidst the pandemic. In the US and the UK, the businesses remain open despite soaring cases of the deadly virus. The MACD shows signs of quick recovery. 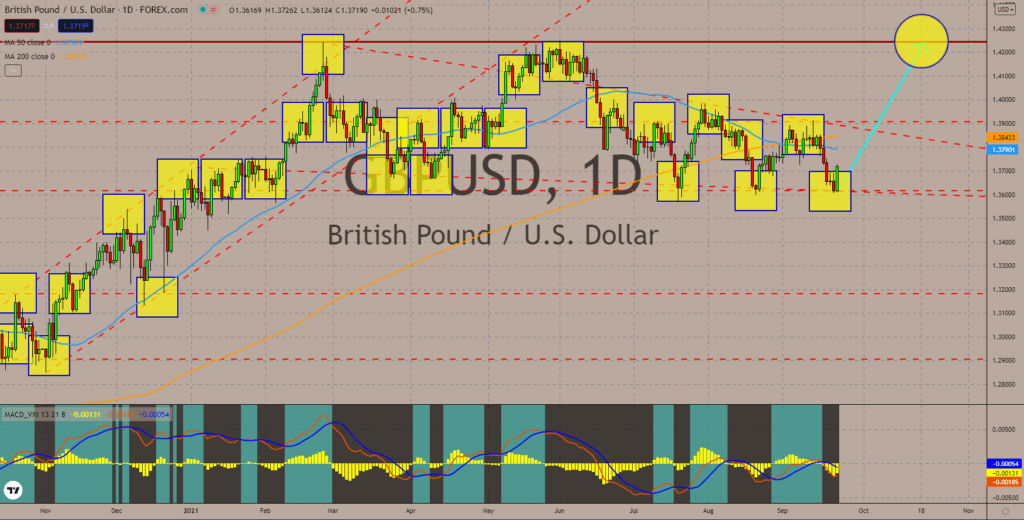