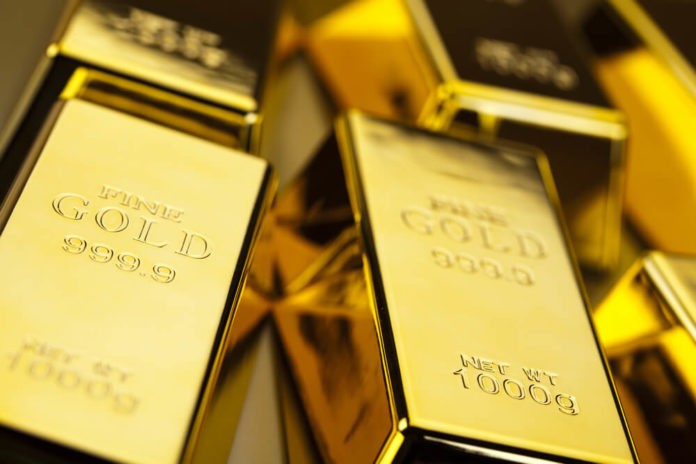 Gold (XAU/USD) slipped through the Asian session. It plunged to two-day lows near the $1855 zone. However, the downside movement lacked strong momentum.

The yellow metal saw some selling in the first half of the trading action in Asia. It appears to have stalled its recent strong recovery move away from the multi-month lows.

The prevalent active market mood was considered to be one of the major factors exerting some pressure on the gold. The prevalent US dollar selling bias, however, minimized downside movement.

Johnson & Johnson announced that it could acquire late-stage trial results for a single-dose vaccine as early as January.

Moreover on the vaccine front, Pfizer cleared another hurdle. The U.S. Food and Drug Administration (FDA) unveiled documents that indicate no new safety or efficacy worries.

Meanwhile, prospects for extra US fiscal stimulus measures to help offset the economic effect of the pandemic continued weighing on the dollar. It extended some support to all of the dollar-denominated commodities.

An upbeat in the US Treasury bond yields failed to impress the dollar bulls. This might limit any runaway rally for the non-yielding precious metal.

There is no major market-moving economic data expected to be released from the U.S. on December 9, 2020. That said, the US fiscal stimulus headlines might play a major role in influencing the US dollar price dynamics.

Together with the wider market risk sentiment, it might also contribute to offering short term trading opportunities around the XAU/USD.

Precious Metals Down in the European Session

It was interestingly a clear risk-on session overnight, as the major markets closed higher and gold lost almost 0.5%. The precious metal headed into the European session trading at $1860 while silver lost 1% to trade at around $24.30.

News coming from China reported that the country’s November consumer price index (CPI) printed at -0.5% y/y. This was compared to the analyst consensus of 0.0%, the first negative reading in 11 years.

Some analysts pointed out though, that this decline is less meaningful due to a surge in late 2019 in pork prices. The reading would have been 0.05%, if it is adjusted to not include food and energy.