The yen and the Swiss franc gained on Friday, as investors sought refuge in safe-haven assets because of renewed US-China trade tensions and weaker-than-expected data in the top two economies that revived global growth fears.

A report on Thursday said that the Trump administration was considering an executive order in the New Year to declare the national emergency that would stop US companies from using products that are made by Chinese companies Huawei Technologies and ZTE.

“With the end of 90-day tariff moratorium looming ominously on the horizon, this announcement is yet another bump in the rocky path to a trade resolution,” said Stephen Innes, who is the head of Asian trading at Oanda.

Trade tensions between the world’s top two economic powerhouses have been among this year’s biggest risk factors, though US and China on December 1 agreed at a 90-day truce in their tariffs dispute while they try to negotiate a durable deal.

Meanwhile, the markets are still doubtful whether the two sides can settle their differences, which go beyond trade to intellectual rights and other issues.

In Asian trade on Friday, the yen added 0.4 percent against the dollar, while the Swiss franc tacked on 0.3 percent as fresh growth fears pushed investors back into safe-havens.

The anxiety in the markets has helped these currencies this month gain 2.3 percent and 1.2 percent, respectively.

Currencies in general are trading in thin volumes, with the year-end positioning adding to volatility.

The dollar index, which is a measure of the dollar’s strength against a basket of six other major currencies, slipped by around 0.15 percent to 96.34, after shedding 0.5 percent overnight.

Data that showed consumer confidence at its weakest pace in more than three years in the United States, as well as an unexpected drop in industrial profits in China, provided a loud reminder to investors of the deteriorating global growth outlook.

That came just a day after a dramatic surge on Wall Street had given some respite to battered investor sentiment. Overnight, US stocks ended higher in a volatile session.

In December, the Federal Reserve raised rates for the fourth time this year and it forecast two more rate hikes in 2019.

Financial markets are expecting US growth to slow down next year as the spillover effects from rising interest rates hit corporate profits and economic activity.

For this reason, the interest rate futures market is barely pricing in just one more hike in 2019 as many traders expect the Fed to pause on its monetary tightening path if economic data weakens in the coming quarters.

“There are intensifying headwinds facing the US economy in 2019 – namely the lagged effects of higher borrowing costs, the stronger dollar, the fading support from the fiscal stimulus and weaker external demand at a time of a rising trade protectionism,” said Jame Knightley, who is the chief international economist at ING.  “These factors will increasingly weigh on sentiment in 2019.”

Oil prices have also slumped in recent months, and this has kept commodity currencies such as the Canadian dollar under intense pressure. The loonie traded at C$1.3620 and has lost 7.5 percent of its value against the US dollar this year. 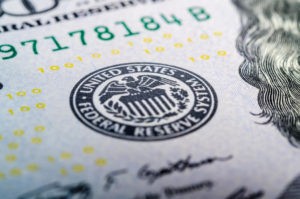 Some analysts expect the Canadian dollar to strengthen if oil prices rebound in the New Year.

“The Canadian dollar was the only currency that failed to benefit at year-end because of oil but as crude prices stabilize, so will the loonie,” said Kathy Lien, who is the managing director of currency strategy at BK Asset Management.

The euro fetched in 0.2 percent, trading at $1.1452. However, the common currency has struggled this year because of the weak euro zone data, political risks, as well as low inflation. These have led to the European Central Bank maintaining ultra-low interest rates. The euro is on its way for a loss of 4.5 percent versus the greenback this year.