China has the second-largest economy in the world, this fact underlines the potential of the local economy. For the last several decades, China enjoyed uninterrupted economic growth. Once agrarian society became the world’s economic powerhouse. It is essential to mention that China is largest country in the world when it comes to the size of the population.

Nevertheless, thanks to hard work and investments once the developing country has an emerging middle class. This shows that the country is developing as more and more people can afford to buy not only the bare necessities but other items as well.

This brings to the real estate sector, which plays an important in every country as people are willing to invest in property. As mentioned above, China is the most populated country in the world with more than 1.3 billion citizens. Only this number is enough to understand the importance of the property sector to the local economy. Also, China’s middle class has the opportunity to buy a flat or even a house. 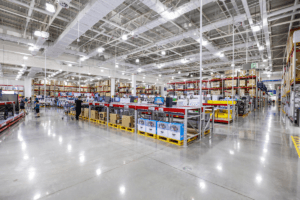 China’s economy is increasing and in the third quarter, its economy expanded by 6%. This number may be even too high for most countries in the world. However, in the case of China, this is not unusual. On the contrary, China’s economic growth rate fell to the lowest level in more than 27 years. This number is lower in comparison with the second quarter of 2019 when it was 6.2%.

Last week China released information about the third quarter. This data showed that China’s economy is slowing down which had a negative impact on the stock markets. The second-largest economy is struggling to deal with economic problems caused by internal and external factors. The trade war between China and the U.S. continues to affect the local economy.

Hopefully, the property sector is in exception, as this is important for the local economy. The price of the average new home increased by 0.5% in September in comparison with August. It is important to mention that’s the case in 70 major cities across China.

For example, in comparison with the same period of time in the home, prices increased by 8.4%. In August of this year, the price of an average home rose by 8.8%. It means that the situation is more or less stable.

It is an important fact that property prices increased for the 53rd month in a row.

One of the reasons why price gains were lower in September is that developers reduced the price of new homes to attract buyers. This happened before the week-long National Day Holiday which is a peak sales season.

Chinese authorities are reluctant to stimulate the property sector. There are several problems connected to this sector. For instance, household debt is rapidly growing. Another problem is that rising home prices increased the risk that the real estate market may collapse. In this situation, it is not surpassing that authorities are trying this scenario, which will have a huge effect on the local economy.