On Tuesday, the Dow Jones Industrial Average declined by 280.23 points to 27,502.81. It is worth mentioning that the current decline is the biggest one-day point and percentage drop since October 8. During the morning trade, Dow Jones fell by nearly 458 points. The comment of U.S. President Donald Trump affected the stock markets.

Stocks of the companies which found themselves in a difficult position due to the trade war declined on Tuesday.

The PHLX semiconductor index, which is used to measure the performance of major U.S. chip makers declined by 1.5%.

On December 3, shares of E.L.F Beauty Inc. declined by 5%. The shareholder of this company, Marathon Partners, sent a letter to the board of directors. In this letter, Marathon Partners urged the company to think about a strategic overhaul, including a possible sale.

Also, shares of world-famous company PepsiCo Inc fell by 0.3%. The company decided to acquire the BFY Brands Inc. maker of PopCorners snacks, for an undisclosed sum. 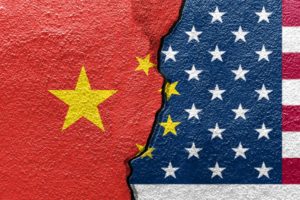 As mentioned above, Trump’s comment affected the stock markets. On Monday, Trump was in London and to attend a NATO meeting. He said at a news conference in London; that he had “no deadline” regarding the trade war with China.

He even went further and stated that it might be even better to wait until after the election. This comment once more underlined that it is hard to say when trade war will finally come to an end.

Moreover, on the same day, Trump used his Twitter account to announce that he is going to impose tariffs on Brazilian and Argentinian steel.