JetBlue is a major American low-cost airline headquartered in New York City and it is one of the largest airlines in the U.S.

On Thursday, JetBlue released the fourth-quarter results. This news helped to boost JetBlue shares as on January 23, shares increased by 4.7% to $20.72 and outperformed stocks of other airlines.

According to the JetBlue Airways Corporation, it was able to reduce the costs by $314 million over the past three years. Moreover, JetBlue surpassed the cost-saving target.

As a result, the airline will have the opportunity to offer budget-friendly airfares over the next decade.

It is worth mentioning that cutting costs is a priority for many companies. However, it is even more important for New York-based airline. JetBlue’s business model depends on fares, which makes it possible to compete with legacy airlines.

Airline’s target was to save from $250 million to $300 million. However, renegotiated contacts for the engine maintenance as well as transition to an all-Airbus fleet, helped to surpass the target.

JetBlue currently operates more than 200 airplanes. As a result, it has to spend a lot of money to maintain all of those engines. The airline spends $325 to $350 million a year.

JetBlue signed a new contract for half of the 400 engines that power its A321 and A320 fleet last summer.  Moreover, the airline is working to sign the final phase for the rest of the engines.

JetBlue and its business model 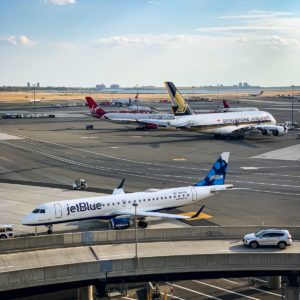 This airline plans to increase its capacity by between 5.5% and 7.5% this year. Currently, JetBlue flies to 102 cities in the United States, Caribbean, and Latin America.

Moreover, it plans to launch a service to London in 2021.

Also, its business model is different from other competitors. The airline offers perks such as extra legroom in coach and free Wi-Fi. It means that the company should balance between product and cost.

Total operating revenue increased by 3.2% to $2 billion in the fourth quarter in comparison with the same period in 2018.