Wheat is on active export demand

European traders said that the Algerian Professional Cereal Board had bought about 400 000 tones of optional-wheat flour in a global tender closed on Tuesday. Some dealers estimated the quantity at 450 000 tons.  Algeria doesn’t disclose the results of its bids.

Wheat is required for shipment during two periods. The first one between March 1 to March 15 and the second one from March 16 to March 31. In case if wheat was supplied from South America, the shipment will be held between February 1 and 15, and between 16 and 29.  Dealers said that France is expected to provide part of the total as Algeria is the most significant customer of French wheat.

On December 5, Algeria bought about 500 tons of flour at around 227 dollars per ton, including shipment costs.

European wheat futures in Paris rose to their highest levels in nearly a year and a half on Tuesday, supported by the rise of US markets and the persistence of transport problems in France due to the strikes in protest against the reform of the pension system there, dealers said.

Chicago wheat futures have also touched their highest level in over a year. In contrast, Russian export prices trade at season highs as wheat markets are boosting purchases by importers. Also,  Russia’s government proposed to cap grain exports and logistical snags in France due to strikes.

Russian wheat prices are going to increase because of strong demand. Additionally, Key exporting countries have weather-driven expectations of lower crops. Argentina and Australia have low production expectations because of the dry weather, so this will create additional demand, said Elena Neroba, market analyst. Russian wheat prices have been surging since September, tracking the international market.

Wheat Harvest increase and hopes for the future

Meantime, the EU harvested 154 million mt in 2019, increased production by 13%. Consequently, the exports may reach 31 million mt, which is a 33% increase, according to USDA. 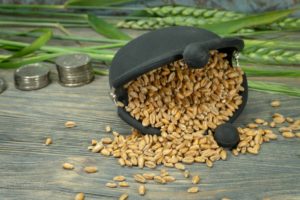 A furor of international wheat tenders by major importing countries over the past several weeks has also supported global wheat prices. Algeria, Egypt, and Turkey, among others, habitually pay higher prices for their purchases.

Egypt’s GASC has purchased over 1 million mt of wheat since the beginning of December. Egypt is the largest wheat importer and consumer in the world.

In Germany, there is the potential for some export loadings to be switched from France. German traders say that high wheat prices around the Black sea cause more export demands in Germany. Traders say they are receiving more inquiries to replace French supplies. Traders believe that if the strakes continue in France, French wheat will be replaced with German.