Cathay Pacific is the flag carrier of Hong Kong, as well as one of the founding members of the Oneworld Alliance. Interestingly, shares of Cathay Pacific jumped 2.27% on October 21, after the company made an important announcement.

Hong Kong’s flag carrier made the decision to close its subsidiary Cathay Dragon. The airline used to fly to mainland China as well as other Asian destinations. However, Cathay Pacific hopes to retain most of the routes operated by its subsidiary. Unfortunately, airlines in different parts of the world are trying to avoid the worst-case scenario.

Importantly, the airline’s group is trying to reduce costs during travel restrictions that governments have imposed to limit the pandemic. The flag carrier already tried to cut costs by deferring aircraft deliveries. Moreover, the group implemented special leave schemes as well as reducing executive pay. Furthermore, it also received a $5 billion bailout from the Hong Kong government in June. Despite all measures, the airline group is still losing as much as $260 million a month. 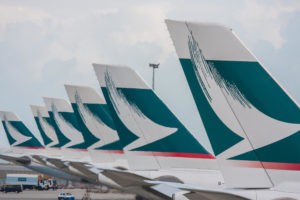 It is worth noting that, the restructuring will cost $284 million. However, the airline will be able to reduce costs by $64 million a month in 2021.

Out of 8,500 positions the airline will eliminate, 5,300 jobs will be from Hong Kong and a further 600 from overseas. Importantly, a total of 2,400 positions are currently unfilled due to a hiring freeze as well as the closure of some overseas operations.

People should take into consideration that the job losses account for around 24% of the Cathay Pacific’s total staff.

Furthermore, Cathay Pacific will ask Hong Kong-based cabin and cockpit crew to agree to changes in their employment conditions. The airline’s group wants to match remuneration more closely to productivity.

As stated above, Hong Kong’s flag carrier is not alone, as other airlines are also struggling to cope with problems. Based on the information provided by Cathay Pacific, it expects to run at half capacity through next year.

Let’s have a look at Cathay Dragon. The airline originally operated as Dragonair and its history dates back to 1985. It is worth mentioning that, initially it operated charter flights to China and also flew to several cities in South East Asia. The flag carrier acquired a stake in the airline in 1990 and became the owner of this airline in 2006. Cathay Pacific adapted to the new reality. Hopefully, the Cathay Pacific and its budget carrier Hong Kong Express will take over Cathay Dragon’s routes.