On December 4, several factors helped the U.S. markets to strengthen their positions. Stocks reacted to a news report that said the U.S. and China nearly completed the trade and would sign the “Phase One” agreement.

According to the people familiar with the negotiations process, two countries were able to move closer to sign this agreement. The U.S. and China will have to cancel some of the tariffs as part of the so-called phase-one trade deal.

Moreover, President Donald Trump stated that trade talks with China were going well, which is another good news.

On Wednesday. France, as well as other European Union members, promised to retaliate against potential U.S. tariffs on French products. 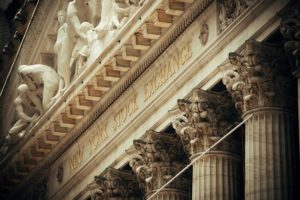 The protracted trade war remains one of the biggest challenges for the markets. The good news about the trade dispute, helped the major stock indexes to regain their positions.

Two days ago, on Tuesday, the Dow Jones Industrial Average fell by 280 points. At one point the index even declined by 457 points after Trump stated it might be better to wait until the presidential election. It was the third straight of losses for stocks due to concerns about the future of the “Phase one” deal.

On December 4, shares of chipmakers increased thanks to positive news. The shares of VanEck Vectors Semiconductor ETF (SMH) gained 1.5%. Moreover, Nvidia and Micron Technology traded higher by 0.9% and 2.4%, respectively.

It is not surprising that shares of Nvidia and Micron Technology rose on December 5 as trade war affected shares for the last two years.