USD to Chinese Yuan Edges Down Amid Trade War News

The USD to Chinese yuan exchange rate struggles to pick up its pace this Wednesday’s forex sessions. The greenback is pinned down by the yuan’s strength that came from trade war optimism.

Yesterday, the USD to Chinese yuan pair climbed to its highest record again in three months as it gained strength from investors. However, it soon hit resistance, and the CNY refuses to back down.

Both currencies gain strength after investors became significantly more hopeful about trade negotiation chances. Although, in the end, the yuan managed to overpower the greenback in sessions, thus the USD to Chinese yuan decline.

Other currencies closely related to the yuan, such as the Aussie, are also doing fairly well against the greenback.

The yuan’s gains come as Beijing pushes the US President to remove more sanctions as part of the agreement’s first phase.

According to sources close to the matter, both presidents are expected to sign the first part of the deal later this November. 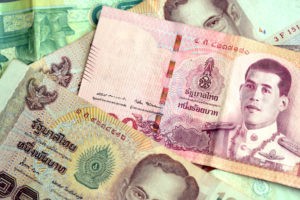 Meanwhile, on the Eastern side of the globe, Asian traders are looking more into the Thai baht. The currency continues to draw attention from traders as its strength helps local investors with overseas businesses.

This update, aside from the USD to Chinese yuan exchange rate, is the focus of most Asian traders this Wednesday.

Even if the strong Thai baht worries foreign tourists and exporters, local businesspeople are basking in its glory. The Thai investors are taking advantage of the currency and are investing abroad with a strong baht.

Traders expect that the baht will continue to hold on to its current levels after the Thai central bank’s decision. Earlier today, the Central Bank of Thailand delivered its long-awaited monetary policy rate cut.