WTO awarded more than $7 billion to the U.S.

Home » WTO awarded more than $7 billion to the U.S.

The World Trade Organization (WTO) decided in favor of granting the U.S. approval to impose tariffs on European products. The trade dispute between the U.S. and the European Union may have a long-lasting effect on the global economy. According to WTO, Airbus received state subsidies, and by doing so it gained an unfair advantage against Boeing.

At the moment, Boeing and Airbus are the biggest civilian aircraft manufacturers in the world. Only this fact is enough to understand the importance of this dispute to the aviation industry. However, this dispute will have much bigger implications for the global economy.

According to this ruling, the U.S. can impose tariffs wide variety of products ranging from aircraft to dairy products. It means that this dispute will affect many sectors of the economy. This is a serious issue for European companies. It is worth mentioning that the dispute regarding the illegal subsidies started 15 years ago.

Let’s have a look at how the dispute between the U.S. and EU shaped their relations. In 2004, the U.S. made the decision to file a case against the EU. The U.S. argued that cheap loans provide to Airbus were equal to illegal state subsidies. It is interesting that WTO also ruled in favor of the U.S.

However, this story did not end there as the United States complained that the EU, as well as several member countries, failed to uphold this decision. The dispute continued for 15 years as both sides were unable to come to an agreement. It is worth mentioning that the U.S. demanded $11 billion. Nevertheless, the WTO decided to $7.5 billion. This is the biggest amount of money granted to any country in the history of this organization.

The outcome of the WTO’s ruling 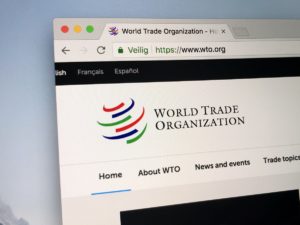 As mentioned above, the result of this trade dispute will have a serious impact not only on Airbus but on other sectors as well. The senior officials from the office of the U.S. Trade Representative (USTR) said that the U.S. would impose sanctions.

The WTO decided in favor of the U.S. on Wednesday. On the same day, the USTR released the list of products. The tariffs will start working from October 18. According to the list, the U.S. will impose 10% tariffs on aircraft from France, Germany, and Spain, or the United Kingdom. It means that this tariff is going to target the countries which are primary producers and owners of Airbus.

Alcoholic beverages are also on the list. This will be bad news for the lovers of Irish and Scottish whiskeys. The U.S. will impose 25% tariffs on these products.

Dairy products are also subject to duties. For instance, companies that import cheese from Germany, Spain, and the U.K will have to pay 25% tariffs.

However, it does not mean that the U.S. has nothing to lose after winning this dispute. The World Trade Organization ruled that Boeing was also receiving illegal tax breaks. In 2020, the WTO will decide how to deal with violations. This will give the European Union the possibility to apply tariffs on U.S. goods.

The situation regarding this trade dispute may end without a winner. Neither the U.S. nor EU will be satisfied with the outcome of WTO’s ruling.